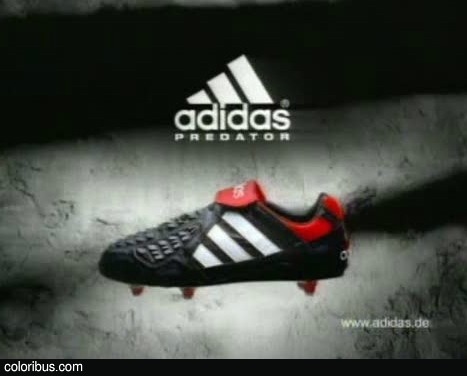 Some TV adverts for the greatest boots ever made: The adidas Predators. Featuring David Beckham, Zinedine Zidane, Oliver Khan and many more!

Would you believe that adidas filmed television adverts for the Predators, and one specifically for the Manias? I didn’t have a clue until I was browsing the web for more information on the Predators.

In this blog, I have included some TV adverts that were broadcasted ‘back in the day’.

The first video below is a commercial for the 1st Predator boots, named ‘Cup’, that was released by adidas in 1994.
Prepare yourself…

In this second video, which is my favourite of the list, shows a young Rui Costa scrubbing his 1995 adidas Predator Rapier boots.
I find this video inspiring to youngsters wishing to chase their dream as a professional footballer, and Rui Costa certainly fulfilled his dream.

Here’s a video of Paul ‘Gazza’ Gascoigne performing in a rather bizarre commercial for the 1996 Predator ‘Touch’ boots..

The adidas Predator Mania advert / commercial, which was released in 2002. It also seems a little more relevant than the previous video.

A commercial for the adidas Predator Pulse, that shows some history on the Predator collection, as well as some extra features that adidas have added/improved.
The improvements mentioned are ‘PowerPulse’; extra padding on the outside front area of the boot, X Traxion and a External Heel Counter,  This video was released in 2003.

And the last commercial video I could find is the Predator X, which again, features a few ex professionals which require no introduction. This advert was released in 2009.

So there you have it, a few commercials on the adidas Predator boots.

Before you go, why don’t you test your football knowledge and see if you can name all the players in the videos, in the comment box below.